"Mah Bucket's" Beesmas 2017 Event: Nuts N Bolts is an unofficial Roblox event headed by Mah_Bucket, a well-known member of the Roblox community. He and his development team coordinated with many popular game developers to make this event to act as a fun replacement to the Roblox Christmas Giftsplosion event after it was retired in 2016. This event began on December 1st, 2017, and concluded on December 25th, 2017.

Each day, a hint was revealed, and players had to guess what to do to finish the tasks. Some missions involved codes which could be redeemed in a popup that would appear after clicking the Jester, an in-game character in the Beesmas game. Badges were awarded for finishing every mission.

Defaultio participated in this event by adding the Honeycomb and the Honeycomb Decoder, both important features that allow the player to finish Day 2 of the event.

When the reward was still obtainable, players were required to speak to Jester, and insert the code "6573542".

Players who finished Day 2 of the event would be greeted by a popup once they loaded their base that gave them the option to redeem the Beesaxe.

Bees moving toward the camera.

Side view of the bee's motion.

Location of the Honeycomb. 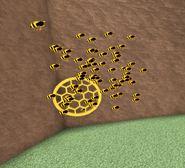 The dot on top of the Honeycomb. 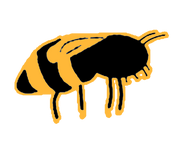 Bee.
Add a photo to this gallery
Retrieved from "https://lumber-tycoon-2.fandom.com/wiki/%27%27Mah_Bucket%27s%27%27_Beesmas_2017_Event:_Nuts_N_Bolts?oldid=262473"
Community content is available under CC-BY-SA unless otherwise noted.