The "Mah Bucket's" Beesmas 2018 Event: The Gift of Bees is an unofficial Roblox event organized by Mah_Bucket. As a celebrity in the Roblox community, he has successfully organized last year's Beesmas Event, ''Mah Bucket's'' Beesmas 2017 Event: Nuts N Bolts. He and his development team recruited several games to participate in this event as a fun replacement to the Roblox Christmas Giftsplosion event after it was retired in 2016. This event began on December 8th, 2018 and concluded rather sadly, having the last few games cancelled. Lumber Tycoon 2's part in Beesmas concluded on January 1st, 2019.

Every day for 12 days starting from December 8th, the game name for the day and the two hints for easy and hard gift respectively, are revealed at 00:00 CST. Players could use the hints given to the in the Beesmas Place to find the gifts in each game. Each gift had a badge for the Beesmas Hub to identify whether a player has got it or not. If one obtained the badge needed for a gift, it was rewarded in the game immediately.

Unlike 2017's Beesmas Event, one could not use revealed codes to claim their reward. Some quests involve codes, but they were mostly randomized. This was to prevent people from ruining the fun, as some would simply enter the codes for reward, making the effort made by other players ignored.

Unexpectedly, day 10 and 11 of Beesmas were cancelled because of unfinished content, and after a while, day 10 followed suit.

The Easy Gift required players to go to Fancy Furnishings and navigate their way into a room within a caved-in maze hidden beneath the displayed Fridge in the store. The room contained a powered lightbulb and a platform in stone and yellow carpet that displayed the axe.

In the same room with the axe, there was a code etched in yellow on the wall, above where the axe spawns, which was different for every single player and assumed to be used as a prevention for others to use for themselves, without doing any work. If the code was told to the tree who owns the Beesmas Garden, it would give the player the Chill Out! badge, as well as some dialog stating: "Ah, look at that... a clever little hunter, aren't you? Very well, here's your reward.", and granted the player the day 4 Easy Gift quest completed.

The Hard Gift required players to chop Cherry Wood trees for a bee to accompany them and pollinate flowers scattered across Lumberland, and finally, return them back to the Beesmas Dispenser. There are six flowers in total that needed to be pollinated, as well as six holes in the dispenser for bees to go into. Once all the bees have made the flower-like structures filled with color, a code appeared on top of the dispenser hole, and when spoken to the tree in the Beesmas Garden, would say "Ah, look at that... a clever little hunter, aren't you? Very well, here's your reward.", and rewarded the player the Blooming In Winter badge.

The room under Fancy Furnishings, without the Many Axe box. 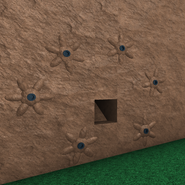 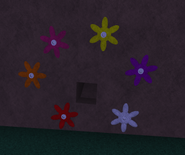 The Beesmas Dispenser with all flowers pollinated.

The bee used to pollinate flowers. 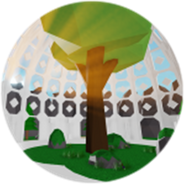 Chill Out!: The Badge earned when the Easy Gift code was spoken to the Tree 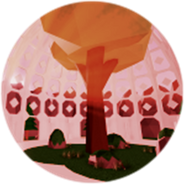 Blooming In Winter: The Badge earned when the Hard Gift code was spoken to the Tree.
Add a photo to this gallery
Retrieved from "https://lumber-tycoon-2.fandom.com/wiki/%27%27Mah_Bucket%27s%27%27_Beesmas_2018_Event:_The_Gift_of_Bees?oldid=254848"
Community content is available under CC-BY-SA unless otherwise noted.