Was in a cave in the Tropics

0.5 (Others)
0.4 (Lava Wood and Cavecrawler Wood)
The Bird Axe, or the Twitter Axe, is an exclusive axe that was available from January 13th to June 9th, 2019, that could be obtained via purchasing a Silver Axe and bringing it to be blessed by the Bird, which could only be done if the player followed Defaultio on Twitter, and completed the other requirements.

This axe does similar damage as with the Beta Axe of Bosses, with the exception of its usage on Lava Wood and Cavecrawler Wood. It is arguably better than the Amber Axe.

It is no longer possible to obtain this axe without trading with other players.

The Bird Axe has a grey handle with a light blue strap. The head of the axe displays a light blue bird, resembling the Twitter icon. It will randomly emit a "peep" sound while chopping wood. The boxed version is not available for normal players unless exploited in. The Lumber Tycoon 2 Wiki does not give any encouragement on exploits of any kind.

This axe was designed by the wiki user, SMALLSOPE42.

This axe was NOT obtainable to users whose Roblox accounts were set to under 13 years old. This enables privacy mode, which prevents their account from revealing identities outside of Roblox's site. Additionally, the minimum age for a user to create a Twitter account is 13.

If one wished to obtain the Bird Axe, they were required to first confirm they had a valid Twitter account and had a Silver Axe with them, which can be purchased from Wood R Us for $2,040 Money. They then hat to travel to the Tropics with the Ferry and find a cave located in the rocks near Link's Logic.

Once the player had entered the cave, instructions could be seen on a stone tablet on the wall, telling them the method to acquire the Bird Axe. Detailed tutorial as follows:

If the player had done all of the above, they could now place a Silver Axe on a golden pillar under a hanging light bulb and interact with the Bird to get confirmation on the criteria. Doing so would turn the Silver Axe into a Bird Axe.

There was limitation on this action. As long as the player has enough Silver Axes with them, they could keep placing them onto the pillar and talk to the blue bird and get as many Bird Axes as they wished.

It is possible for the game to check whether a player has done all of the requirements. With techniques such as Ajax and Twitter API, it is fairly easy to retrieve data from websites and validate it. This could yield consequences to players who have the axe but have not followed Defaultio on twitter. 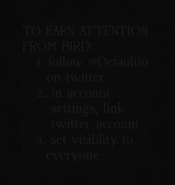 The Instructions, written on a tablet on the wall 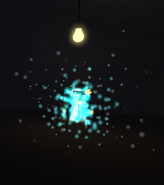