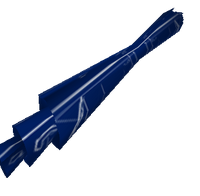 The Blueprint Manager is an item that can be found in a player's inventory, which contains all purchased blueprints of a player, and cannot be dropped or lost upon a player's death, unlike axes. The player will get this item after they have bought their first blueprint.

The Blueprint Manager is a blue sheet of paper rolled up with mathematical drawings on it, much similar to a real life blueprint. When opened, there is a large text that reads; "Blueprints", and underneath that, players can see the blueprints that they have purchased.

Previously, it was impossible to organize blueprints bought in a specific order. Then, on September 25th , 2016, Defaultio released a Builder's Update. The blueprints are now in the order in which the player bought them, as well as categorized by their classification on the tabs to the left of the screen.

This item is used to equip all of the blueprints a player has previously purchased, and be able to place them on their land.

On the left side of the Blueprint Manager, one will see the various categories (in order):

The Blueprint Manager will appear in your inventory when you first buy a blueprint from Wood R Us, or Fancy Furnishings.

*NOTE*: In order to use blueprints, one must have Land to place the blueprints on.

Retrieved from "https://lumber-tycoon-2.fandom.com/wiki/Blueprint_Manager?oldid=210355"
Community content is available under CC-BY-SA unless otherwise noted.