Between Main Biome and Safari
The Bridge is a structure that connects the Main Biome to the Safari, which is separated by the River.

Its main function is granting access to the Safari, which occurs when the bridge is lowered, upon the payment of its fee. It can also be used to access the Lone Cave. When a player lowers the bridge when there is an ostrich eye, the bridge will lower down further than normal, then the water under the bridge disappears, and after that the player must jump down, and then they are at the Lone Cave.

To lower it, one must pay $100 Money to Seranok or Merely, who are located at the Bridge Booths, located at the side of the Bridge. If you have the Super Bridge gamepass, then lowering the bridge has no cost,

Moving the bridge usually takes 10 to 15 seconds, but it can take longer if the server is slow. The bridge stays down for three minutes, but you can pay again to extend the time.

The size of the structure is very large and is mostly colored faded-cyan and grey. It uses a large stone to lower and elevate the road. Beside it is the Bridge Booths, which are operated booths used to pay for its lowering.

A supposed easter egg is also located under its platform on the Main Biome's side; Sorcus.

During the annual End Times Event on Halloween, the metal on the bridge was changed to a rusty metal texture. During Beesmas 2017, the Honeycomb Decoder was added on one of the weights to act as a final hint for the Beesmas 2017 event. 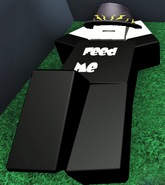 Sorcus, lying under the bridge

The bridge as viewed from the river tunnel at sunrise

The bridge, raised, at night time.

The Bridge on Halloween day.

The safari side Bridge Booth
Community content is available under CC-BY-SA unless otherwise noted.
Advertisement