Both sides of the Bridge
The Bridge Booths are artificial structures located at each entrance ramp of the Bridge, used to pay the toll to lower it. The booths are operated by Seranok and Merely, Seranok being on the Main Biome side and Merely on the Safari side.

The Bridge Booths sport an exterior with a lavender color with the WoodPlank texture. Its interior has the same coloration and texture, but with flooring that is bright yellow, with the Carpet texture.

The Booth's roofs are slanted backwards, with a glass pane and a circular hole on the front. It also has a functional grey door, which can be opened and closed by the player. Both the booths contain unique and different posters on their interior.

When a Preserved Enlarged Ostrich Eye is put in or in front of the circle on the glass on either booth, the bridge will be lowered to the Lone Cave, allowing the harvesting of Phantom Wood. Please note that it is best to do this in a private server because public servers often do not have the tree due to people getting it before. The doors on the booths can also be opened. 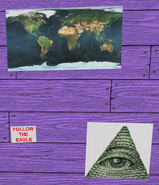 Merely's "FOLLOW THE EAGLE" poster during the 2016 End Times Update.

The Illuminati poster found at Merely's booth during the End Times Update. 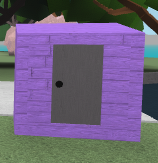 The back door to the booths.
Community content is available under CC-BY-SA unless otherwise noted.
Advertisement