Cavern of the Sight

Behind Shrine of the Sight

The Cavern of the Sight is a quest area that is hidden behind the door of the Shrine of the Sight, which is located inside the Rock Bridge Cave on the Mountainside. Currently, this cavern is the only place you can obtain the painting, Bold and Brash (other than buying or trading).

Note: As of 9th June 2019, players can NO LONGER use two boxed version of any items to unlock the door of the Cavern.

This cavern can only be accessed by successfully unlocking the Shrine of the Sight. To do this, the player must first confirm the ownership of two numbered cubes that follow the following criteria:

If done correctly, players should immediately hear a grinding noise, as the door of the shrine slowly opens. It will lead into a dark tunnel large enough for vehicles to go through. The player must take a right turn shortly after the entrance, and it will lead the players into the cavern.

For more info on how this shrine was solved, visit Jerricks' blog post (slightly outdated).

Note: It is actually possible to access this cavern using glitches and/or exploits. The only problem is that the cavern won't spawn if this is done. The in-game scripts that run the cavern only activate after unlocking the shrine correctly.

The cavern bears a resemblance to the Cavecrawler Cavern, round and with a flat center but not deep. At the center, you can find a slate material wedge with the painting Bold and Brash on it (after opening the shrine correctly). Only one painting is  present per server, though some have said that it regenerates after 30 minutes; when a new player enters the Shrine. The painting will be unclaimed so anyone can take it, it is best to retrieve the painting on a private server. On the roof, there's a hole or glow brick with sunlight shining the painting, you can take a look the photo of it below. 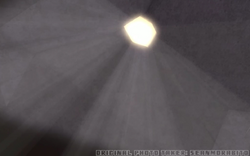 Retrieved from "https://lumber-tycoon-2.fandom.com/wiki/Cavern_of_the_Sight?oldid=261688"
Community content is available under CC-BY-SA unless otherwise noted.