Semi-fast (4 min)
Elm Wood is an abundant and widely used species of Wood in game, being the cheapest and being on the most accessible biome. It can be cut by most axes except the Candy Cane Axe. This type of wood is often cut up and sold in the Wood Dropoff as a quick way to make money for new players or used as a plentiful material for filling in Blueprints.

Despite the tree's size, its value is the least of all trees, including oak.

Elm trees grows in a way very similar to Oak Wood, with the obvious differences of increased height and more complex branching patterns. It sprouts various dark and bright green leaves, with a grassy texture. Elm logs look much similar to those of Fir Wood, however, its interior has a light tan color. Elm Trees also grow rather thick, similar to Lava Wood, but not quite as thick as Koa Wood. It is moderately uncommon in the Main Biome and Tropics, while it's much more common in the Safari.

It can be cut by any type of axe, with the exception of the Candy Cane Axe, but a Rukiryaxe or better is suggested for an efficient harvest.

A vehicle is recommended when transporting large quantities of wood. For milling, a Sawmax 01 or better is recommended due to the fact that most of the wood's logs are big and thick. 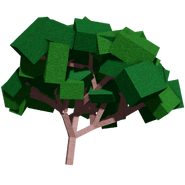