The Lone Cave, also known as the End Times Biome, Abyss, or the Void, is a semi-biome cave consisting of a gray-slated walkway. This place is well-known by players because this is where players can chop and gather Phantom Wood.

This biome is considerably dark and empty, consisting of a very thin, light-blue road in an extremely large black box that is layered by a thick sand padding. The road is shaped similarly to an upside-down Y, with one Phantom Tree per server growing on a patch of soil at the end of the main extent of the walkway (there are no accounts of there being more than one tree at a time).

A rusty bridge connector is to the right extent of the road, and it's where the Bridge connects with the road. On the left extent, there is a hole that will teleport the player to the Safari Hole which will lead to the Safari biome next to the bridge itself.

The method for traveling to this biome is expensive and complicated. It requires numerous items, some of which are not always available. Players can add more time if they like, so it would be a considerably good idea to have one person by one of the Bridge Booths to continuously add time if needed. The items needed are:

After purchasing, the bridge will start to slowly lower, cutting through the water and sand , creating a hole slightly larger then the bridge. After a few minutes, the bridge will connect to the rusty bridge connector in the biome. The player may then carefully drive their car off the bridge and down the pathway towards the Phantom wood tree.

It is recommended that the player lowers the bridge in the morning because once it becomes night, the area will be completely pitch black and could result in the player falling off the edge or dropping the chopped wood because the area has a narrow pathway.

Once the player has reached the Phantom Wood, the player must use the End Times Axe (Because other axes would either disappear or fall onto the ground without doing damage to the tree) to cut the tree. The player could also choose to use dynamite to do damage to the tree but it would be highly ineffective and do very little damage. It is recommended to not cut the entire tree down, as due to it's large size and intertwined branches it is very likely the tree will fall into the void, possibly taking the player with it. Instead, chop branches off the tree off, and carry those either to the bridge, or to the safari hole.

If the player chooses to take the wood up the bridge, they must either load it into a vehicle and drive forwards and backwards as the bridge rises, or carry the branch as the bridge will likely glitch any loose items, including wood, down into the void.

If the player chooses to drop the wood into the Safari Hole, the player should take care as to not fall into the hole with the branch, as walking back to the bridge from the hole can be very time consuming. It is also recommended to chop the wood into small pieces as to prevent them from getting stuck in the hole. The player must also take care as to not leave the wood in the hole for too long, or the wood may despawn. If a player is to use the safari hole, it is recommended they toss a Worklight in the hole as well as the safari hole exit is quite dark.

There are difficulties in almost every single aspect of traveling to and from the biome: from balancing the ostrich eye to the bridge coming up. The ostrich eye can take anywhere from 1 minute to 5 minutes to balance. Here, a player is able to balance the eye in an extremely short amount of time.

An outside veiw of the Safari Hole

The End Times side of the Safari Hole

The Rusty Connector to the bridge when it reaches End Times 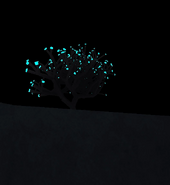 A Phantom Tree growing in the Lone Cave 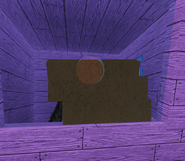