The cave was fairly small, however, it consists of a tiny crack in the wall with a cliff, and also a wide narrow flat area above the right-wall of the cave (which is accessible with 2+ people, or a tree). Your car can easily get stuck in this hole or even flip upside-down, rendering it useless except for use as a light source. It should be noted that once a player enters this cave, they will be unable to return to the surface without another player's assistance or tree.

This cave seems to have been accidentally added in the January Mega Update along with the Taiga Mountain Passage. At the time of its creation, most people thought of it as nothing, but as time went on, more and more people began to speculate about the reason of its existence along with if it would ever or if it did serve a major purpose in the game. On February 15th, 2017, the Taiga Mountain Passage was extended quite a bit when Defaultio made most rocks thicker and added an entire new area at the very top of the passage called the Taiga Peak. Later, with the expansion of most rocks, the taiga mountain passage cave was blocked off by a rock which had been extended.

Inside of the cave.

The Cave filled with Worklights and 2 Cars credit to 1011025m, panpoppular, and for the pic (Before Taiga Mountain Passage Extended its rocks)

A player inside the cave. 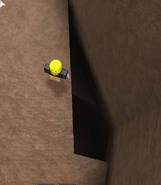 Sometime in late 2018, this anomaly appears to have opened back up, but not in the same way. There is now a smaller crack in its place wide enough for players to squeeze through and drop down, onto what appears to be similar to the Maze Ledge, but much smaller. Because of this, it is no longer possible to drop vehicles down into this location. It is still located right below the Taiga mountain passage, but is more like a cliff and has large opening to the Void. Because of this, players may jump down into the void, and re-spawn without losing any axes they are carrying. The existence of this location may likely be just another terrain bug, and could possibly be blocked off again, like the Mountain Passage Cave.

Add a photo to this gallery
Retrieved from "https://lumber-tycoon-2.fandom.com/wiki/Mountain_Passage_Cave?oldid=261714"
Community content is available under CC-BY-SA unless otherwise noted.