Extremely Slow (8 Hours)
Phantom Wood, also known as End Times Wood or Lone Cave Tree is a species of wood that was added during the 2016 End Times Update. It is located in the Lone Cave and is the most expensive wood in the game when sold at the Wood Dropoff.

It has an institutional white sand texture for its bark, and previously had a light yellow smooth plastic texture for its interior, before being changed to the institutional white foil texture. On lower render qualities, the foil texture will be toned down until being entirely removed, rendering it as a smooth plastic material. Its leaves have a toothpaste neon texture. It is roughly 1x0.5 studs in size, similar to that of the Test Wood tree. It is one of four woods that has an interior with a different material type.

The tree's overall structure is a dense mix of leaves and intertwining branches that thicken as it matures. The tree also grows extraordinarily fast during its primary growth stages if it is not generated on Server Initialization.

Only a maximum of 1 tree can grow at one time, so after being harvested the player must server-hop to find another tree. Despite the misconception that the tree only grows "once" per server, within the code it can grow again after a player waits 7200 minutes or 120 hours after the tree had been initially planted and the previous tree had died or been cut down.

The End Times Axe is the only axe that can cut the wood, as using other axes will make it fall out of the player's hand in a similar effect to when the Candy Cane Axe is used on any wood. The Chop Saw also does not do any damage to the wood's log. Surprisingly, Dynamite can do damage to the tree, but it is incredibly minimal and should not be used as a method of harvesting or cutting in general.

Before proceeding, the player is required to have these items:

It is also recommended to have the following things:

Once the required items have been acquired, the player must follow these steps to have a successful and effective harvest:

Private servers are the best places to harvest Lone Cave Trees, as on public servers the tree may have already been harvested or other players might intentionally extend the bridge time. It should be noted that using Phantom Wood as a source of income is generally impractical as the costs of the necessary items for harvesting, the required allocation of time, and the uncertain outcome heavily outweighs the actual monetary value one can get from selling the planks at the Wood Dropoff. 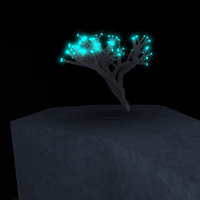 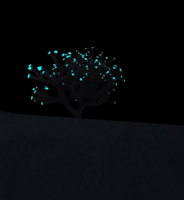 Phantom Wood in the dark
Community content is available under CC-BY-SA unless otherwise noted.
Advertisement