River; near The Bridge

The River Tunnel is a geographic feature and tunneling system located near the Bridge and under the Swamp.

It has small sand landmasses that leads up to a wide, sandy platform that houses a memorial and the spawn location of Snowglow Wood.

Players can access the tunnel by driving any vehicle to the sand banks carefully, using them as gaps to regenerate health back and slowly progress towards its end.

In its earliest recorded history, it was unfinished in the forms of dead ends and void openings. It also had a similar design to the Maze, though much smaller. During the Alpha Testing Stage, it could be swam into because the "water" did not damage the player. Images or videos of it in this stage are sparse.

The general theory of its purpose during this stage was that it was going to be a maze system (as interpreted by the many winding halls), which was later scrapped for the actual Maze in the Tropics. From there, the abandoned project lay unused until around early 2018.

On March 1, 2018, the tunnel was finished in the form of sand landmasses, and the completion of the entire tunnel system. This led to players' speculation of an update relevant to an event, a new wood type, or a new item.

On March 13, 2018, the largest sand landmass at the end of the tunnel was updated to spawn Snowglow Wood and hold a memorial for a very game-devoted player, Ticktatwert, who passed away due to medical complications. The memorial was in a form of her YouTube thumbnail, a T, and a stone ramp with the text "1997-2018".

The River Tunnel Entrance during an Endtimes event

The entrance of the river tunnel 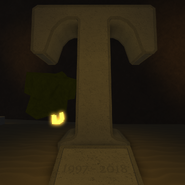 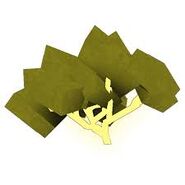 Snowglow Tree
Add a photo to this gallery
Retrieved from "https://lumber-tycoon-2.fandom.com/wiki/River_Tunnel?oldid=263191"
Community content is available under CC-BY-SA unless otherwise noted.