The Roblox Winter Games 2017 Event was an event hosted by Roblox during the winter season. There were three games that were included in this event: Speedrun 4, Freeze Tag, and Lumber Tycoon 2. The update was released prematurely on February 14th, 2017 and fully released on the 15th of February 2017. The event ended 2 weeks after its premature release, on February 28 th, 2017.

This event was simple: Gather the necessary amount of Snowglow Wood to drop off at the Snowglow Bin in order to make "Firewood". By completing this simple quest, players were awarded the "Winter Games" badge, as well as an avatar back accessory called "Skiipack".

During the time of this event, the player is greeted with a splash screen upon joining the game, stating:

Once the player presses the "Okay" button on the splashscreen, a box appears asking if the player needs assistance in completing the quest. If the player agreed to the tutorial, the camera will fly to the desired areas needed to complete the quest. The player can also decline the tutorial and proceed to the game like normal.

The Splashscreen that you get when you join

The prompt thas asks you if you need help

After clicking "Show me" 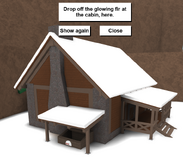 After clicking "Next"
Add a photo to this gallery

When players join the game during this event, they will notice that most of Lumberland is covered with snow. The only places where there is no snow include the Bridge, the Sand Dock, the sand around the Wood Dropoff, semi-biomes, and the Cherry Meadow.

During this event, the entrance to the Taiga was permanently opened by a scaffold-like structure known as the Taiga Scaffold. Its use was to block any boulders spawned by the Snow Cave from blocking the entrance to the Taiga. The reason for this structure was most likely so that it could be easier for players to complete the quest. The ground beneath it is also one of the areas that don't have snow.

A new tree, Snowglow, spawned in the Taiga and was the main item for the Winter Games quest. The wood was cheap, about the price of Oak Wood, and can easily be chopped with any axe (except the Candy Cane Axe). The logs are the third wood type to give off a neon glow, but when planked, it turns into a bright-yellow color. After the event, Defaultio removed Snowglow trees from spawning, resulting in users having to buy from other users to acquire snowglow wood. Read more at the Snowglow Wood page.

A new building was found in the Taiga: a large cabin with a chimney at the back of the biome. Players must bring Snowglow Wood and drop it off in the Snowglow Bin on the side, to fill up a meter. For every piece of Snowglow processed, a piece of Firewood spawns at the top of the chimney. Even though the event ended, the Winter Cabin and Snowglow wood still remain in the taiga, yet the Snowglow bin is now permanently closed.

Once players have successfully filled the Snowglow Bin with the desired amount of wood (according to the meter on the side), a screen similar to the splashscreen will appear, congratulating the player for completing the mission. Upon this screen appearing, the player is awarded the "Winter Games" Badge, as well as a Roblox avatar back accessory called "Skiipack".

Add a photo to this gallery
Retrieved from "https://lumber-tycoon-2.fandom.com/wiki/Roblox%27s_%22Winter_Games_2017%22_Event?oldid=259691"
Community content is available under CC-BY-SA unless otherwise noted.