Rocks and Cliffs are natural geographic features that can be found throughout the entirety of Lumberland. These features of Lumberland are found in brown and rectangular forms with the slate material, and often pile up on each other, becoming higher, denser, and taller.

The Snow Arch is a rock feature located within the Taiga that connects an island of rock to the rest of the Mountainside.  It is not shaped like an arch, however, because of its position, it has been called by players an arch.

The Taiga Peak is located the top of the Taiga, where it can be accessed by using the Taiga Mountain Passage, a narrow, winding trail that leads to the top of the Mountainside in the Taiga.  It gives the player a broad view of the surroundings and provides access to Frost Wood.

The Safari Hole is a hole found high up on a rock wall within the Safari. It extends back for about 14 studs and can be accessed by going through the hole on The Maze or by going down the hole in the End Times Biome.

The Snow Cave is a cave dugout near the Mountainside at the entrance of the Taiga. This cave is the source of the boulders that fall down a slippery and rocky path that blocks the entrance to the biome.

The Rock Bridge Cave is a small cave located underneath the entrance to the Volcano. On its rear-end is an explodable wall that leads to the entrance of the Shrine of the Sight when opened.

The Swamp Rock is a large rock located in the center of the Swamp. The rock is little more then an anomaly, although it does feature a glowing, pink stone underneath it.

The River Tunnel is a cave that is located at the side of the Bridge. It contains Snowglow Wood, and the memorial for Ticktatwert on a large landmass in the back of the tunnel. Although the iridium-filled water is damaging to the player, It is possible to drive through the tunnel, if the player regernates on the 4 small landmasses around the tunnel walls.

The Snow Peninsula is a geographic feature that protrudes from the Mountainside near the Taiga.  It is the same as all the other peninsulas; it comprises layered rocks slowly getting shorter and shorter as it goes into the Ocean.

The Sealed Cave is a tunnel-shaped sinkage near the spawn area across from Yes! – it's the Land Store behind a large rock. There are no components held by the cave and will remain as an anomaly.

The Maze Slate is a block located beneath the floor of the maze. It is unique because it has the largest volume of any cliff (slate block) in Lumberland. It has a volume of 101,932,532.07663 cubic studs and is inaccessible. The rock coming in second place for volume is accessible and is located to the left of the volcano with a volume of 62,749,315.560011 cubic studs. This data has been tested and confirmed. 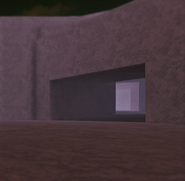 Add a photo to this gallery
Retrieved from "https://lumber-tycoon-2.fandom.com/wiki/Rocks_and_Cliffs?oldid=261175"
Community content is available under CC-BY-SA unless otherwise noted.