Next to the Main Biome

The Safari is a biome separated from the Main Biome by the River. There are three stores located within the Safari: Fancy Furnishings, Boxed Cars, and Bob's Shack. Cherry Wood, Elm Wood, and Walnut Wood can grow in the Safari, Walnut being exclusive to the Safari only.

During October, Sinister Wood and Spook Wood can be found, but will be unable to grow on roads due to them being misspelled as "read" instead of "road".

The most common method of accessing the biome is through the Bridge. It can be lowered by paying one of either bridge operators in their Booths, located at the ends of the Bridge.

One may cross the river without paying for the bridge, swimming across or having long but wide enough planks to drive across the bridge. The player will be unable to transport loose items across if they had swam across.

Another method is through the Safari Mountain Passage, which requires going through the Swamp using the Rock Bridge.

The Safari Hole is a hole located in one of the western cliffsides of the Safari. Its purpose is to serve as a one way portal from The Maze or End Times Biome.

There are two methods of accessing the Safari Hole; through The Maze/End Times Biome or climbing to it through planks.

The Safari Mountain Passage is a passage leading from the Swamp down to the Safari. Its main purpose is to serve as the exit from the Swamp if the Rock Bridge had despawned, but players also use it as an entrance into the Swamp.

The Safari Points are two small, triangular ledges located at the northern cliffside between Bob's Shack and the Safari Cliff Peninsula. They are a dull green and grassy platform, with occasional trees growing. The points are a result of a wedge terrain not being fully covered by the rocks.

The Safari Peninsula is a geographic feature located in between Fancy Furnishings and Bob's Shack, which was added in June of 2019. It was added along with the Safari Cliff Peninsula. It serves no use at the moment, but has been provoking speculation due to its sudden appearance.

The Peninsula consists of only land, with water being surrounded on 3 sides of the Ocean. It is nearly lined up with the nearest Sand Island, and will likely have some future correlation with the Safari Cliff Peninsula.

The Safari Cliff Peninsula is a rocky peninsula located at the northwestern end of the Safari, which was added in June 2019, along with the Safari Peninsula. Its location makes it the furthest northern point in Lumberland. The extension of the Safari is not visible except through high altitude locations such as the Swamp or Volcano, thus it was not discovered until sometime after the update. It serves no use at the moment, but has been provoking speculation due to its sudden appearance.

It is made entirely of rocks, unlike its grassy counterpart. It borders the western edge of the Ocean and stops at the northern edge. Its position bordering the ocean suggests that the region north of the Safari may change drastically over time, much like how the Taiga Mountain Passage evolved.

The peninsula grants on-foot access to the northern edge of the ocean, which has been found to have a walkable ledge due to the ocean not completely covering the seafloor. 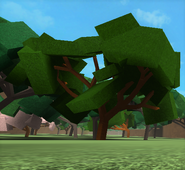 Add a photo to this gallery
Retrieved from "https://lumber-tycoon-2.fandom.com/wiki/Safari?oldid=261679"
Community content is available under CC-BY-SA unless otherwise noted.