Shrine of the Sight

The Shrine of the Sight is located deep underground, behind the Rock Bridge Cave. This shrine consists of a large cut into a stone wall with two holes on the sides, that drop into lava. The cut in the wall is the entrance to the Cavern of the Sight, that contains the Bold and Brash painting.

This place was also used for the Ready Player One Event. Please refer to that page for information on it as this page is only focused on accessing the Cavern of the Sight.

This is one of three areas that can be accessed with the use of dynamite. It must be detonated at the far inner wall at the end, past the corner of the Rock Bridge Cave, (the cave near the volcano entrance which leads to the Swamp). After the explosion, it will reveal a path that descends and leads to the Shrine. The path is wide enough for any type of vehicle in the game to drive down. The rock blocking the entrance to this area will regenerate after around 30 minutes.

It used to be possible to access the top of the Shrine from the Underground Grove, on the opposite way to the Lava Trail, by jumping into a hole. It was easy to land on top of the shrine successfully, but one could miss and fall into the lava or the Void. However, this was patched by an extra floating lava lake being added above the Shrine.

Note: As of 9th June 2019, players can NO LONGER use two boxed version of any items to unlock the door to the Cavern.

In order to open the shrine, before the boxed items trick were implemented, the player had to first confirm the ownership of two Numbered Cubes which met the following criteria:

Once the player mets the requirements, they had to then bring those two cubes to the Shrine, which players could navigate by using the map. It was recommended to bring a truck, as the painting is large. Players also needed a stick of dynamite, as the Shrine is blocked off by a wall at the back of the Rock Bridge Cave.

The shrine contains two holes in the ground, with lava at the bottom. The player had to drop Cube 12 into the left hole of the shrine (the left when facing the door of the shrine), and Cube 13 into the right hole (it was not required for them to be dropped at the same time, nor is it required to drop the cubes in a specific order regarding their numerical position). If done correctly, the player will hear a grinding noise as the door of the shrine slowly creaks open.

When it has fully opened, it will reveals a dark tunnel with a right 90 degree turn not very far ahead. After turning right, the player will see a large illuminated cavern (similar to the Cavecrawler Cavern). This area was named the Cavern of the Sight. In the center, a large boxed painting stands on a pedestal, with a godly light shining down on it. This painting was named the Bold and Brash, influenced by the cartoon Spongebob Squarepants. 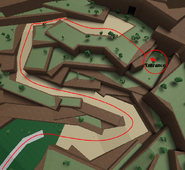 Add a photo to this gallery
Retrieved from "https://lumber-tycoon-2.fandom.com/wiki/Shrine_of_the_Sight?oldid=261687"
Community content is available under CC-BY-SA unless otherwise noted.