Under Bridge,
Spawn Area Side

Is a troll that lives under a bridge.

Sorcus is an easter egg located underneath the Bridge (where it still connects to the ground), at the Main Biome side. He is based on the Roblox administrator Sorcus. He is seen laying down, as it seems that he is relaxing and sleeping on the grass, with his hat tipped down, covering his eyes.

Sorcus wears Sorcus's Lightning Fedora, a Feed Me shirt, and black pants. He also has the Robloxian 1.0 package, and the Stare face.

As Sorcus is considered a metaphorical "troll", his location may be a reference to the fairy tale "Three Billy Goats Gruff". In the tale, three little goats were scared by a fearsome and hideous troll that lives underneath a bridge. The joke is that he is known as a troll throughout the Roblox platform, and fairy tale trolls live under bridges.

It could have also been directly inspired by Roblox's 2013 Egg Hunt, in which the player had to feed 7 spams to the Sorcus Egg under the bridge in order to obtain it. 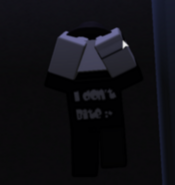 Add a photo to this gallery
Retrieved from "https://lumber-tycoon-2.fandom.com/wiki/Sorcus?oldid=261995"
Community content is available under CC-BY-SA unless otherwise noted.