The Taiga Peak was introduced in Roblox's "Winter Games 2017" Event and is the only location in Lumberland where Frost Wood grows.

Due to the peak's high elevation, one may get a fairly large view of the Ocean Cove and the Taiga. To locate the peak, the player must go to the Taiga Mountain Passage, then walk (or drive) all the way up the path, across the bridge-like structure (driving is not recommended, due to the high possibility of falling off), and along the path. The player should continue along the path until reaching the peak. While driving/walking up, snow may obscure drop-offs and cliffs, so one must be careful not to fall off. The Ruined Lighthouse is also located nearby the peak, in the Taiga Peak Cave, when you are heading up to the peak, you may see a small hole located In the side of the mountain.

The Taiga Peak is an area at the top of the Taiga Mountain Passage. Sloping down from the peak are two cliffs, one of which is commonly used to harvest Frost Wood (also known as ice wood). The second cliff seems to drop under some of the rocks, particularly one that you use to get to the peak. There is slope/chute down one of the cliffs that slide items/trees down to the base of the mountain. One may find Frost Wood trees growing here; also, the peak is surrounded by moderately high cliffs. Since the Frost Wood update, the route to the peak has been extended.

Frost Wood is the most expensive normal wood in the game currently, A log sells for $9 money but a plank sells for $107, making it one of the most sought after obtainable woods. It sells for so much because of the fact that it is very difficult to obtain, having to go to high elevations, and have to drive on thin bridges. 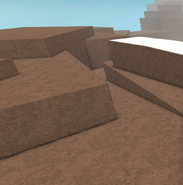 Add a photo to this gallery
Retrieved from "https://lumber-tycoon-2.fandom.com/wiki/Taiga_Peak?oldid=261713"
Community content is available under CC-BY-SA unless otherwise noted.