The Volcano is a geographic feature located at the top of the Mountainside. Within the Volcano, areas such as the Lava Trail, Underground Grove, Boulder Cave, and the Lava Cavern which leads to the Green Box. The wood exclusive and found at its peak is Lava Wood.

It can be accessed by driving up the tan, gravel road in the Mountainside. If the player desires to reach its peak, the player must first own a vehicle and pass the obstacle inside.

The most unavoidable obstacle the player encounters. Heat depletes the player's health constantly while inside the obstacle. The player will die from heat after roughly fifty-three seconds within the obstacle, but it may take significantly longer on slow or laggy servers.

It is possible, but quite rare, that the heat damage on some servers will lag so much that the player will regain health faster than it is depleted, rendering this obstacle harmless, or sometimes, very rarely, you may not take damage from heat at all.

Big spherical boulders spawn inside the Boulder Cave, which is located near the top of the course. When a player enters the volcano, boulders will begin to spawn inside the cave and wind down the path. The player must find a way to dodge these boulders, as being struck by one will send their vehicle flying in a typically unwanted direction.

There is also a chance that 2 or more boulders might clog the entrance of the Boulder Cave, which blocks any boulders from exiting and going on the Volcano track, which lets you freely pass-through the volcano without the worry of being hit. However, you can still die of the heat and the lava.

"Lava", as its interpreted, is a bright-red and passable platform that when touched, will instantly kill the player. Any unanchored object that comes into contact with it will have its weld broken and emit flame particles.

The Red Fog functions as its name suggests. It is only visible inside the Volcano and partly blinds the player from seeing farther terrain for hardly 15 studs. It should be noted that entering during the night time will significantly increase the amount of fog visible. 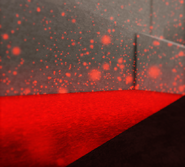 Volcano prior to December 2015 revamp.

Add a photo to this gallery
Retrieved from "https://lumber-tycoon-2.fandom.com/wiki/Volcano?oldid=261701"
Community content is available under CC-BY-SA unless otherwise noted.